In recent years, you’d have to been living under a rock to miss the growing controversy surrounding glyphosate, the active ingredient in herbicides like Roundup, and it’s ever expanding presence in our food supply.

Over the past two to three decades, usage of glyphosate has been steadily increasing, now surpassing 18.9 billion pounds applied globally. (Source)

The introduction of Roundup Ready genetically modified crops, like corn, soy, cotton, sugar beet and alfalfa, that can withstand application of glyphosate-containing Roundup and not die- and an expired patent for glyphosate that allowed generic low-cost alternatives to enter the market have all played a part in the expansion.

Just as the side effects, sustainability and safety of genetically modified crops have been a hot topic in food and health circles, the toxicity and health effects of glyphosate have been under scrutiny since its inception.

Not only relegated to farm land and agricultural usage the world over, Roundup and other glyphosate based herbicides are often used in lawn maintenance by ill-informed homeowners and landscapers.

Glyphosate is not only applied as a weed killer, but is often used in a dry down procedure, or as a pre-harvest dessicant applied to crops just days before harvest. This results in glyphosate residue on the end products- like beans, flours, cookies, cereals and more.

The EPA has continually raised the acceptable levels of glyphosate residue on foods, even organic foods, to accommodate for this, despite public outcry. (Source)

Recently, glyphosate has been declared as a “probable carcinogen” by the International Agency for Research on Cancer (IARC)

Though long hailed as a safe herbicide, which contributed to its widespread and indiscriminate usage, we are finding out that all is not as it seemed.

However, this pathway is present in all bacteria, including our very own gut bacteria!

In addition to aiding our digestion, the microbiota present in our gut synthesize vitamins, detoxify xenobiotics, participate in our immune system and moderate gastrointestinal tract permeability.

In essence, glyphosate destroys the microbiome of humans and plants. An unhealthy gut is at the root of many modern diseases.

“While glyphosate is obviously not the only environmental toxin to contribute to these diseases and conditions, glyphosate’s ability to disrupt the gut bacteria, to impair serum transport of sulfate and phosphate, and to interfere with (Cytochrome P450), logically progresses to this multitude of diseased states, through well-established biological processes.

And glyphosate’s disruption of the body’s ability to detoxify other environmental toxins leads to synergistic enhancement of toxicity. While genetics surely play a role in susceptibility, genetics may rather influence which of these conditions develops in the context of glyphosate exposure, rather than whether any of these conditions develops.” (Source)

Organic crops are not sprayed with herbicides like glyphosate. Choosing organic food has been a go-to solution for people looking to avoid the side effects of glyphosate.

However, reports continue to emerge that glyphosate has now been detected in organic foods like grains, cereals and even dairy products and eggs, suggesting that glyphosate is bioaccumlating in animals exposed to glyphosate through their feed. (Source)

Because glyphosate residues have also been found frequently in soils and sediment, ditches and drains, precipitation, rivers, and streams; and less frequently in lakes, ponds, and wetlands, soil water and groundwater, irrigation and rainfall have been investigated for the residue found on organic foods. (Source)

Drift from glyphosate application on conventional crops to organic crops in nearby fields is also a likely culprit.

So, how are we supposed to protect ourselves from glyphosate and maintain a healthy gut?

If organic foods, waterways and soil are contaminated, what other measures can we take?

This has been a constant question for me over the past year as report after report came out exposing residues on foods I’d previously assumed were free of glyphosate.

In my nutritional therapy practice, I work with many clients on supporting their digestive health and the gut destroying health effects of glyphosate are extremely concerning.

First of all anything we can do to reduce our exposure is key.

It goes without saying that you should avoid using Roundup or other glyphosate based herbicides on your property and educate your neighbors and any landscapers to do the same.

I definitely advocate for sticking with as many organic foods as possible, even given the recent findings because the glyphosate levels were obviously much, much lower in organic foods than in conventionally grown foods.

A gluten and sometimes even a grain free diet can also help tremendously, especially during times of recovering your health, because grain based foods have some of the highest glyphosate residues, and gluten is known to degrade the lining of the gut by activating zonulin, a toxin made at the level of intestinal lining that weakens the tight junctions, leading to a leaky gut.

Cultured foods contain probiotic, or beneficial, bacteria we need to be healthy.

Real food diets rich in vegetables, fiber and safe starches also provide prebiotics, or foods that help nurture the probiotic bacteria in the gut.  Alliums like onions, leeks and garlic, along with inulin containing foods like jicama and chicory, plus avocados, peas, asparagus, and cocoa are all examples of prebiotic foods that can fit deliciously into most real food eating styles.

However, even the most dedicated of us has trouble maintaining a perfect diet at all times. And with growing cross-contamination, a “perfect” diet is becoming increasingly difficult to source. Times of stress, budgetary constraints, changing food producers or moving, during busy family times or while traveling, ill or just living life will inevitably knock us off our game.

What if we had a little “insurance” for these times?

To that end, I’ve discovered a very cool new supplement, called RESTORE, that Matt and I have been using for the past six months or so with good results.

I found out about it from a friend, also a healthcare practitioner, who uses it with her family and has seen amazing changes in her health and her kiddos health (including one child who is on the spectrum).

We have all seen decreased bloating, improved digestion, more tolerance of gluten and other foods we encounter when dining out or at friend’s homes, improved behavior and cognition and what seems to be a more calm nervous system.

Rather than a prebiotic, probiotic or vitamin supplement, RESTORE is an entirely new type of product that actually protects the gut membrane from the effects of glyphosate, gluten and other irritants that provoke zonulin and weaken the tight junctions, leading to leaky gut and its associated effects.

RESTORE nurtures the body’s protective membranes in the gut and in the blood/brain barrier, enabling these membranes to work as naturally intended, to keep us healthy.

RESTORE was found in lab studies to block glyphosate’s insult on human gut tissue to help protect and reinforce the gut wall.

Here is an image that shows the effects of RESTORE. 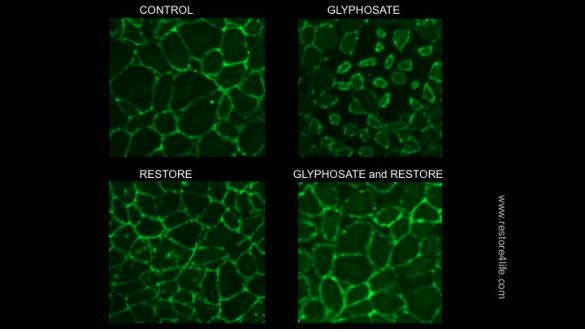 To me, this is an amazing god send.

In addition to protection from glyphosate exposure (and other agricultural herbicides, antibiotics, GMOs, gluten and other food-borne factors), by having a supported gut lining and environment where good gut bacteria can thrive, all the other healthy things I work so hard to do (eating anti-inflammatory diet of real, organic food, drinking filtered water, taking high quality supplements, controlling my stress level and getting good movement and sleep) can be more effective.

Based on laboratory testing RESTORE is highly effective in protecting and strengthening intestinal tissue, and further toxicity testing indicates it is very safe for human consumption.

Other supplements on the market that have some of the same raw materials as RESTORE, may cause significant kidney toxicity, in part because of the way they are processed.

It’s such a simple thing to add to your daily routine to support your health and protect you and your family from glyphosate, gluten and GMO exposure.

Thanks to RESTORE for offering this great deal and sponsoring the post.