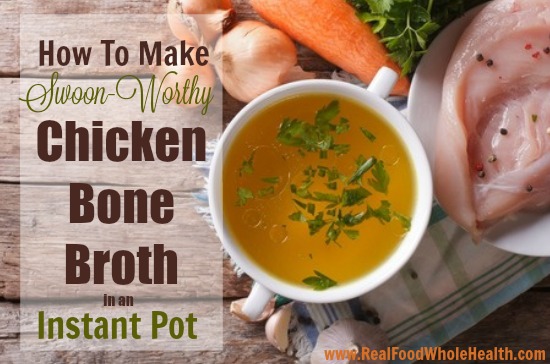 What? You don’t regularly swoon over your bone broth?

Come on, don’t all real foodies go all giddy when their homemade bone broth gels so well that you need a spoon to scoop it out of the mason jar?

Especially when said broth is made in TWO HOURS instead of the usual two days of simmering?

Well, either way, anyone will appreciate the convenience, ease and fantastic results that you get when making bone broth (or meat stock) quickly in an Instant Pot.

What’s an Instant Pot, you ask?

Oh, lucky you- your life in the kitchen is about to get so.much.easier.

An Instant Pot is an electronic pressure cooker that cuts cooking time down to a fraction of what it would normally be and produces wonderfully moist food due to the lack of evaporation.

At first, I was skeptical about cooking with a pressure cooker.

Wouldn’t it be dangerous? I had always heard stories of pressure cookers of old exploding or something- but the new ones are super safe with tons of mechanisms to prevent those issues of the past.

Would it compromise nutrition? Turns out others have wondered that as well- and have to come to the conclusion that no, pressure cooking doesn’t negatively affect nutrition- read here and here.

What about toxicity? This was definitely a concern. I try to avoid nonstick materials in cooking and many cooking appliances are coated with nonstick, aluminum or other undesirable materials. But the Instant Pot interior is stainless steel- the same material I use on all my pots and pans.

Since I have had my Instant Pot (just over a year now) I have not made broth any other way, and in fact have almost completely stopped using a slow cooker for stews, soups, braises, roasts, etc and have even made risotto and cheesecake in the Instant Pot (ok, I see you frantically adding one to your Amazon cart now- you won’t regret it!)

But back to broth… here’s how I make mine every time- and it gels so well and has such flavor!

In your Instant Pot, put bones and cover with water. Add any optional ingredients and secure Instant Pot lid and set valve to “sealing”.
Hit “soup” button and set time to 120 minutes (hit – or + to change time)

When finished, allow to sit for 20-30 minutes before carefully releasing pressure (according to manufacturer directions, by opening the top valve- just watch for the steam)

Strain and store in glass jars in the fridge for up to a week or so.

Can use any other bones (turkey, beef, pork, etc)- use the equivalent of about a chicken’s worth of bones and the same amount of water plus any optional ingredients.

Don’t overfill the Instant Pot- the directions indicate that with liquids it should not be much more than 3/4 of the way full.

This recipe has only been tested in an Instant Pot, since that what I have, but should work in same sized pressure cookers.