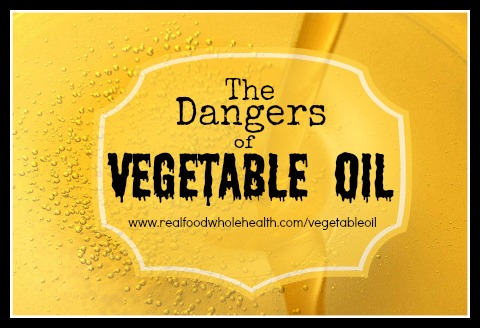 Read what Sally Fallon has to say about industrial vegetable oils, from her must-read article, “Dirty Secrets of the Food Processing Industry” :

The food processing empire is built on industrial fats and oils, extracted from corn, soybeans and other seeds. Crude vegetable oil–which is dark, sticky and smelly–is subjected to horrendous processing to produce clean-looking cooking oils, margarine, shortening and spreads. The steps involved in processing usually include degumming, bleaching, deodorizing, filtering and removing saturates to make the oils more liquid.In the process, the nutrients and antioxidants disappear–but not the pesticides. Most processors also add a hexane solvent in order to squeeze the very last drop of oil out of the seeds. Caustic refining, the most widely used process for oil refining, involves adding very alkaline, chemicals to the oil.

In order to make a solid fat out of liquid oil, manufacturers subject the oils to a process called partial hydrogenation. The oil is extracted under high temperature and pressure, and the remaining fraction of oil is removed with hexane solvents. Manufacturers then steam clean the oils, a process that removes all the vitamins and all the antioxidants—but, of course, the solvents and the pesticides remain. These oils are mixed with a nickel catalyst and then, under high temperature and pressure, they are flooded with hydrogen gas. What goes into the reactor is a liquid oil; what comes out of that reactor is a smelly mass resembling grey cottage cheese. Emulsifiers are mixed in to smooth out the lumps, and the oil is then steam cleaned once more, to get rid of the horrible smell. The next step is bleaching, to get rid of the grey color. At this point, the product can be called “pure vegetable shortening.” To make margarines and spreads, artificial flavors and synthetic vitamins are added. But the government does not allow the industry to add synthetic color to margarine–they must add a natural color, such as annatto–a comforting thought. The margarine or spread is then packaged in blocks and tubs and advertised as a health food. 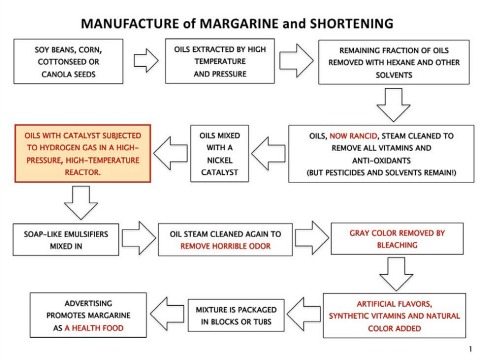 Saturated fat is the type of fat found in such foods as lard, butter and coconut oil. Saturated fat molecules are straight, so they pack together easily. That is why saturated fats are solid at room temperature. Unsaturated fats have a little bend at each double bond, with two hydrogen atoms sticking out on the same side. And when that molecule gets incorporated into your cells, the body wants those two hydrogen atoms to be on the same side of the carbon chain, forming an electron cloud; that is where controlled chemical interactions take place.

During the process of partial hydrogenation, one of those hydrogen atoms is moved to the other side, causing the molecule to straighten out so that it behaves chemically like a saturate—although biochemically it behaves very differently. The original, unsaturated molecule is called a “cis” fatty acid, because the two hydrogens are together, and then it becomes a trans fatty acid, because the two hydrogens are across from each other (“trans” means “across”). Your body doesn’t know that this new molecule is something that has never existed in nature before, and when you eat one of these trans fatty acids, it gets built into your cell membranes. Because of the chemical rearrangement, the reactions that should happen can’t take place. Enzymes and receptors don’t work anymore. The more trans fatty acids that you eat, the more partially hydrogenated your cells become and the more chaos that you are going to have on the cellular level.

All of the margarines, shortenings and even low-trans-fat spreads are made with these harmful ingredients. They’re used in chips and crackers, and most restaurants use them for cooking fries. Until the early 1980s, fast food outlets and restaurants cooked the fries in tallow, which is a very safe fat, but now they use partially hydrogenated soybean oil.

In the past, when you made desserts for your kids, at least the sugar they contained came with butter, eggs, cream and nuts—all good wholesome foods. Now manufacturers can imitate the butter, eggs, cream and nuts, so all you have is sugar, industrial oils and artificial ingredients in these instant puddings, pastries and other artificial desserts.

Many diseases have been associated with the consumption of trans fatty acids—heart disease, cancer, and degeneration of joints and tendons. The only reason that we are eating this stuff is because we have been told that the competing saturated fats and oils—butter, lard, coconut oil, palm oil, tallow and suet—are bad for us and cause heart disease. Such assertions are nothing but industry propaganda.

So what should you eat instead of dangerous, rancid, GMO laden vegetable oils? Healthy, traditional fats.