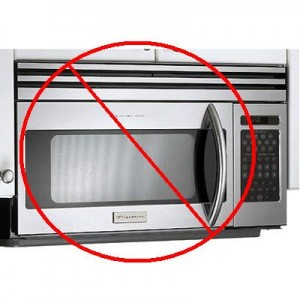 Microwaving  Zaps the Nutrients Right Out of Your Food
by Dr. Joseph Mercola, www.mercola.com

There has been surprisingly little research on how microwaves affect organic molecules, or how the human body responds to consuming microwaved food.

Wouldn’t you expect that a product that sits in more than 90 percent of kitchens, as well as practically every break room in the country, would have been thoroughly investigated for safety?

The handful of studies that have been done generally agree, for the most part, that microwaving food damages its nutritional value. Your microwave turns your beautiful, organic veggies, for which you’ve paid such a premium in money or labor, into “dead” food that can cause disease!

Heating food, in and of itself, can result in some nutrient loss, but using microwaves to heat food introduces the additional problem of the “microwave effect,” a phenomenon that will be discussed in detail later.

The majority of studies on microwaves and nutrition were conducted prior to 2000, I suspect because the focus of radiation research of late has shifted toward a more ominous threat: environmental radiation from electromagnetic devices, such as cell phones and computers, which has mushroomed into a gigantic cloud of electrosmog worldwide over the past decade.

Nevertheless, some excellent scientific data has been gathered regarding the detrimental effects of microwaves on the nutrients in your food:

Quan stated that more damage was done to the milk by microwaving than by other methods of heating, concluding: “Microwaving appears to be contraindicated at high-temperatures, and questions regarding its safety exist even at low temperatures.”

Although many of the above studies are not new, there is certainly ample evidence that microwaving is NOT good for your food.

Instead of using the microwave, use the oven, the stovetop, a toaster over, toaster or crockpot. You can even take a hot plate and stainless steel (or other safe material) saucepan to the office to heat your lunch in.